Icky and Nike on Sunday, all ritualistic like, share a 5.5oz can of Newman's Own Organic Cat Food.
They loooooove it passionately and Nike, aka Princess Pukes A-Lot, has stopped barfing so much.  She's still a puker but not nearly as bad when I was feeding her the other stuff. 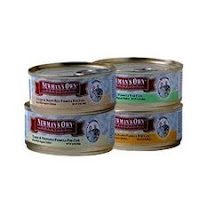 And since yesterday was Sunday and I happened to be at the ReUse center, both things having to do with the plate, I remembered that I wanted to show it off to others.
MommaBean loves it.  Icky & Nike know only that their Sunday Dinner is delievered on it. They come running when they hear it hit the counter.
I picked it up about a year ago for about $.50 at the ReUse center.
The blue flowers and the light green leaves have faded since then, probably because of the weekly dishwasher washing and crusty cat food picking offing that it goes through...
But I love it.  You should too.﻿ 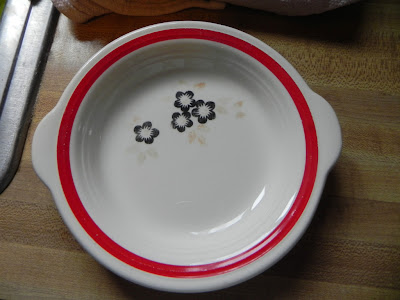