I am not Vegan.  Never was, never will be.

What I am is a "Flexitarian", funky term, eh?

I recently read an article describing what a Flexitarian was and realized that I had found the term that describes me! For the first time I fit into a nice, neat description!

Anyway, what a Flexitarian basically means is that I eat a mostly vegetarian diet but occasionally I'll eat meat.

For me personally, that means about once or twice a month.

So back to the main point here, a co-worker made a Chocolate Cake and brought it in, which she is wont to do, and in passing she casually mentioned that it was Vegan.

Being the adventurous sort (not really), I tried it.

Well okay, only after a few other people had tried it first.

Just to make sure there were no ill effects.

And after only minimal cajoling she coughed up the recipe. 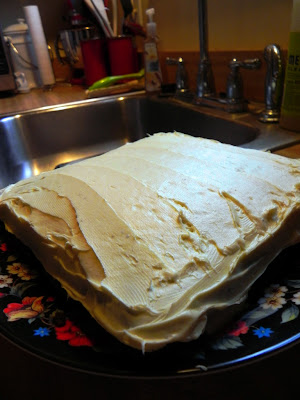 The only picture.
Notice the crap frosting job?
I was dancing around anxiously way too much to stand there for long doing a good job.
(Pssst... look at my pretty plate! I got it at The Hermitage on our Honeymoon)
﻿
Posted by Poppy at 6:00 PM