I'm going to try something new here - I was inspired by a friend who did it for a whole month but I'm going to start with a measly week and if that goes well I'll do it for an additional week and so on.

I'll be posting a picture a day.  A snapshot, a moment in time during a day in the life of me.  Aren't you thrilled?

Since I am such a wimp I'll only impose one rule upon myself - The photo has to have been taken within the preceding 7 days.

And I won't give you any excuse why I am allowing myself to do that other than I'm lazy and forgetful.

So to get this party started:


South Lyon, Michigan
March 9, 2011
Looking out the back door 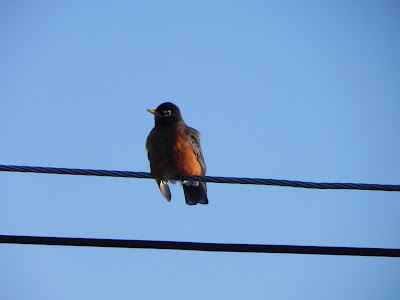 They're out there!
Chirruping their hearts out - Spring may actually be here!
﻿
Posted by Poppy at 11:44 AM