It was a heck of a lot easier than I ever expected it would be.

You folks who bought a Shake Weight? Suckers! This is waaaaaay better because you get fresh butter out of the deal!

A few people have said "You can buy that at the grocery store, you know." or "They have that at Kroger."  Well, no shit Sherlock.  I know that but I am practicing my Pioneer Lady Skills.  Or as I more commonly refer to them Post-Apocalyptic Zombie Survival Skill Set or PAZSSS for short. Will there be cows post-apocalypse? I dunno', but I know how to make butter if there are.  And I survive.  And I can figure out how to pasteurize the straight from the cow stuff.

So as it turns out all you need is cream - pasteurized not ultra-pasteurized.  And something to shake the bejeezus out of it.

At about 3 minutes in something weird happens and feels like the jar is packed full of wet stuffing and there is no sloshing.  Imagine my surprise when I realized that it has become whipped cream!  Now, I've made my own whipped cream before but that was with a mixer.

Anyway, I got a second wind because I'd been told that soon after it would soon start to resemble butter if I kept shaking.

Somewhere about a minute later suddenly and miraculously it all changed.  There was a thunking going on in the jar.  It felt like a potato ploping about so I stopped and looked.


Really, look again!
You then pour off the buttermilk.  Now, people better than me use the buttermilk for biscuits or pancakes or whatever you use buttermilk for but, I just put it in this dish to give over to MommaBean who will use it eons before I will.  Maybe one day I'll use it for something completely awesome. 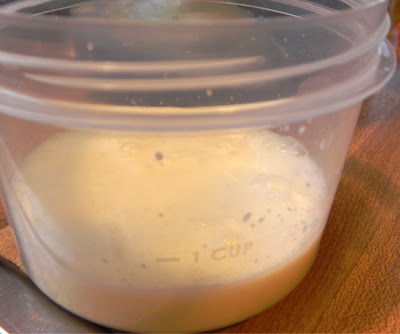 Next comes the most tedious part - washing the butter.  You pour cold, icy cold, water over the butter to get the most buttermilk you can out of it.  I have read that it keeps longer and tastes better the more you wash it.

And you continue to pour water in there and smoosh, smash, stir and scrape until the water turns clear.  Then you keep going, just working the residual water out.

The results of all my hard work:

The Butter Gods have smiled upon me.

Maybe I'll make "fancy" butter next time, now that I am firmly on my way to Butter Goddess-dom.
Posted by Poppy at 9:56 PM