A Day At The Zoo: Take Two

Mr. Wonderful's job drives me bat guano crazy sometimes.  We were planning on going to the Upper Peninsula over the past weekend but they denied him his vacation.  After I had already taken Friday off.

So instead I invited my sister Olive Picker and my beloved Nephew/Godson Handsome Face McGee to go to the zoo with me.

I had never been to the Toledo Zoo and O.P. hadn't been for ages, long before H.F. McGee was in the picture.

It was waaaay more kid friendly than the Detroit Zoo.

It's more compact so kids don't get so tired walking and parents (or Thea's) don't get so pooped pulling the wagon.  There are so many more things for little ones to do! There are things to crawl on, close encounters with the animals  - a baby giraffe tried licking H.F. McGee through the glass window he had his face pressed against which was the Cutest. Thing. Ever! He kept proclaiming 'Baby Giraffe Lick Me!', there is not one but two playgrounds, a veggie garden for them to explore, just a lot more for them to touch and keep them occupied...

And I didn't get one stinking picture with my camera.  I did get a few with my iThingy, as evidenced below. 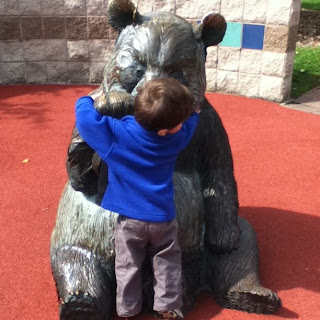 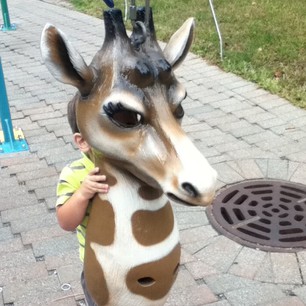 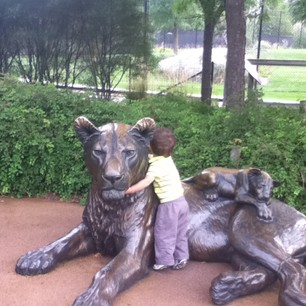 A most enjoyable day in excellent company.
Posted by Poppy at 6:31 PM