My Absence in 15 Pictures*

All of the following pictures were taken with my iThingy.  My camera was in the shop.

1.  Heirloom Carrots, Cosmic Purple - I bought them because of the name.
- found here Victory Seeds - 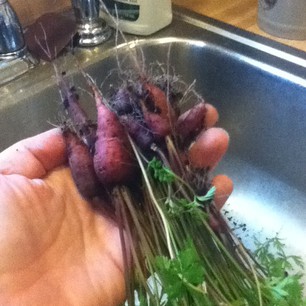 We've come full circle since my first "real" post (Growing Things) and look, I still can't grow dang-heckin* carrots.  The very weirdest part about these?
They're orange, bright orange, hunters orange even, on the inside!
*One of Mr. Wonderful's favored kid friendly non-cuss exclamations
2. How many peanuts does one squirrel buried peanut grow? 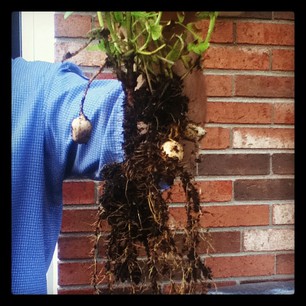 About 8.  I obviously didn't leave them in the "ground" long enough.
3.  Toadstool or Mushroom? 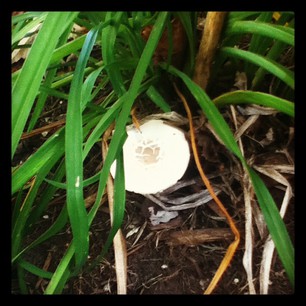 Either way I found this beaut' hanging out in my lilies.
4.  Graveyard Cupcakes 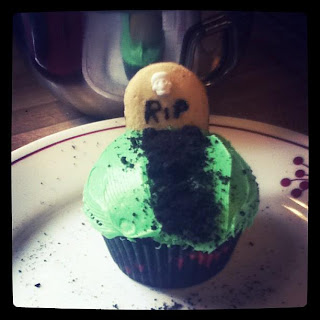 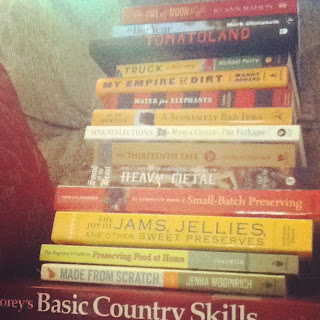 Oy vey.  This isn't even half of them
*The Heavy Metal book is Mr. Wonderful's.  Although I enjoy Heavy Metal, I wouldn't buy a book about it.
6.  The Ick 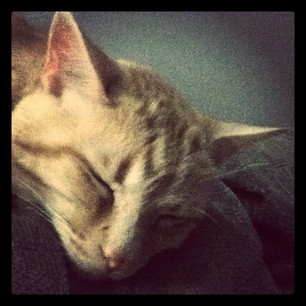 During my self imposed after work internet ban I've had lots of time to do things like read some of those books in the picture and also hang out with Icarus, not that he stays awake for long.
7.  The Rack 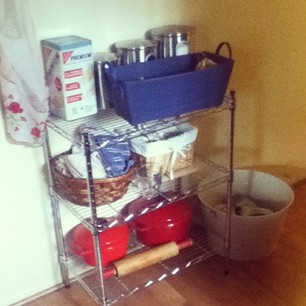 We have very, very little space in our kitchen.  The pantry was full to over flowing.
For years I looked everywhere for a solution and found nothing.
Until this.  Lowe's. $20.00 - Ta da!
Which lead to this the following weekend...
8.  The Big Rack (basement) 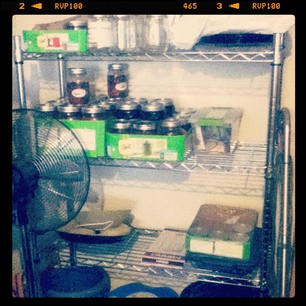 Did you know that canning is addicting?
9.  (another) New Addiction 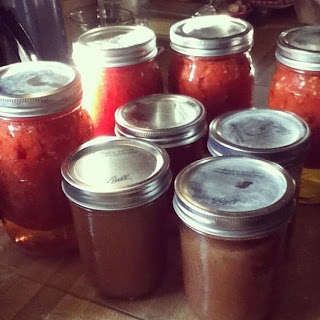 I suppose there are worse things to be addicted to other than:
Canning.

Making applesauce.
Books.
Knitting.
and
Doctor Who.
Right?
10.  Doctor Who 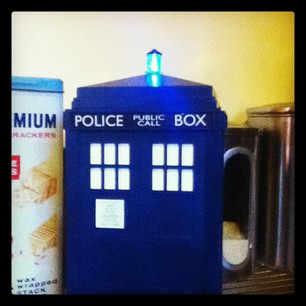 Mr. Wonderful said I could have a TARDIS cookie jar.
The light lights up.
It makes The Sound: voooweeeouuu voooweeeouuu
I am in love.
And
Yes, I am a nerd.
11. & 12.  Experimentation 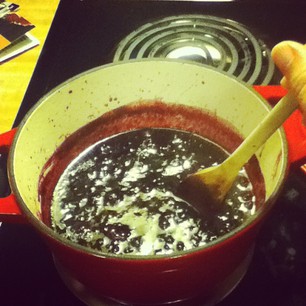 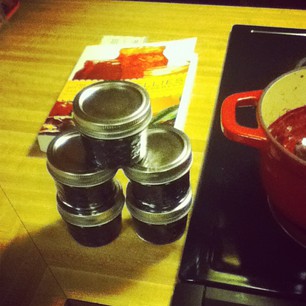 What, pray tell, is a girl supposed to do with (organic) blueberries and blackberries that she had frozen because at the time the thought of eating yet another stinking berry made her bilious?
Why, make jam months later! What else are you going to do on a Saturday night?!
13.  Entertainment Center 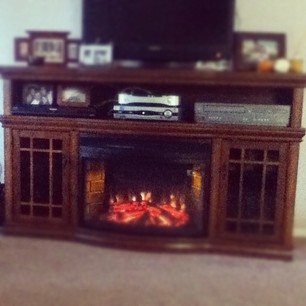 If you were to ask: "Is that a VCR/DVD player in your new entertainment center?"
I would say: "Yes, it's Ben's consolation prize for actually taking down the old one and helping me put up the new one."

If you were to ask: "Is that an Electric Fire Place in your new entertainment center?"
I would say: "Hell yes. Realistic, eh?"
It took years and a lot of nagging, wheedling and out right pressure but we no longer have a K-Mart Bachelor Pad particle board entertainment center from 2001! 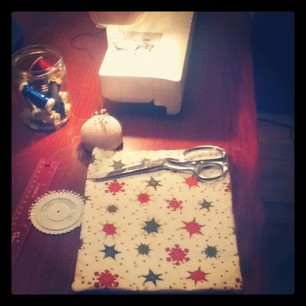 There is nearly nothing in this world that I hate more than not being able to do something.
For my birthday this year Mr. Wondrful's Mom, Mom R, bought me a sewing machine.  Mom R is spectacular when it comes to quilting, sewing, knitting, just about everything.... Me? Not so much with the needle and thread.
After about two months of procrastination I took out my brand new sewing machine, wound a bobbin, cussed a lot, threaded the machine (much easier on these new machines) and went about sewing something.
It isn't a horrid jumbled mess.
Maybe, with practice, I can do this.
Because I don't like not being able to.
And that concludes this post.
At 14.
I told you I couldn't count.
Posted by Poppy at 2:12 PM