I finally got around to going through our pictures from our road trip but now I'm feeling lazy and don't want to write a whole lot.  So, I'm not going to.
Our trip in twelve pictures:
In my original post (Annual Road Trip Day) I went on and on about the blizzard that was supposed to devastate the Traverse City Area.  Well for the vast majority of our way up there (on two lane highways) it looked like this.  Rain.  Cold, windy and grey.  But, just rain. 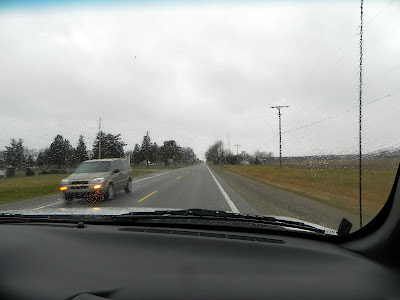 We actually pulled over so I could take a picture of this truck.  Mr. Wonderful is a truck driver by trade and the sight of this Mack hauling lumber made him exceedingly happy.  His eyes literally lit up. 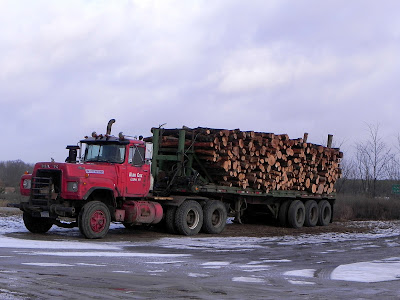 It did start to snow like the dickens though when we were about a half hour away from Traverse City.  For the most part it looked like this for the rest our drive. 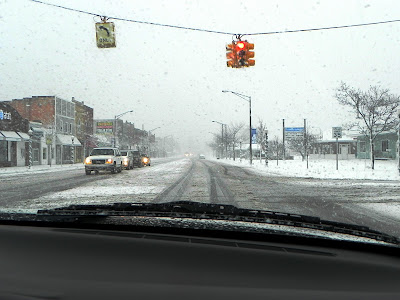 We got to our hotel (The Grand Traverse Resort & Spa) without any issues and checked in.  When we got to our room I was not impressed.  They had put us on the 6th floor in a corner room.  The room was literally shaped like a triangle.  And the view? Sucked.  But, whatever.  It was just a room for one night and it did have a Jacuzzi. 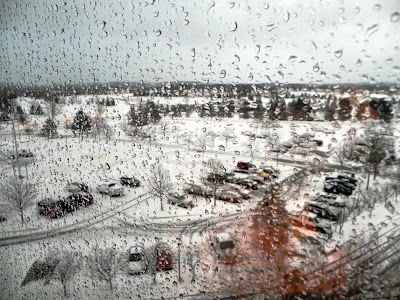 As we were trying to console ourselves that our lot had been drawn and we had a view of the parking lot and the roof at the front entrance.  The heard of youngins' next door started blowing their party horns and making a ruckus.  Knocking on the walls.  Jiggling the door handle that connected our rooms.  Valiantly trying to jimmy the door open.  Where were their parents? They're kids, I get it, but it truly was annoying.  I called my sister to let everyone know we were there and she either heard the distress in my voice or the wee beasties kiddies banging on the door demanding entrance. 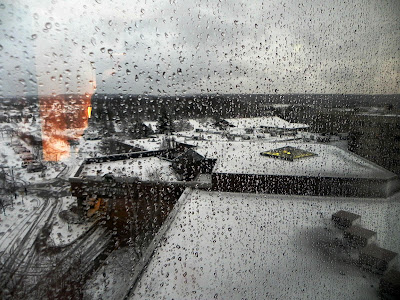 She told me to call the front desk and asked to be moved.  (It was a good idea Olive Picker, thanks!)  So, I called the front desk and politely explained that as children are wont to do they're acting like godless heathens just being kids and therefore rambunctious.  I explained that we were looking forward to some peace and quite and asked to be moved.  Ten minutes later a bell hop showed up and they moved us up four floors.
The view was much better (we could actually see Grand Traverse Bay), there wasn't anyone in the adjoining room and we still had a Jacuzzi.  We decided that we were just going to eat dinner at the hotel and not bother trying to find somewhere to eat because the roads weren't getting any better. 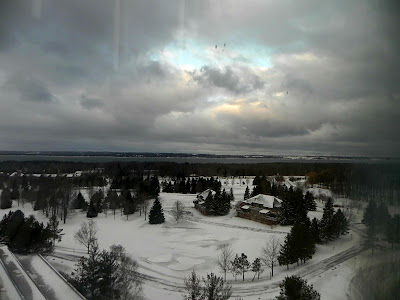 The next morning it was clear and bright so we decided to grab a bite somewhere in town so I set to Googling and found this place Mabel's Restaurant.  Check out the menu.  Stuffed Hash Browns? Yes, please! We packed up and checked out.  The Bay looked beautiful and I wanted some pictures but Mr. Wonderful was hungry so I snapped some through the window of the moving truck. 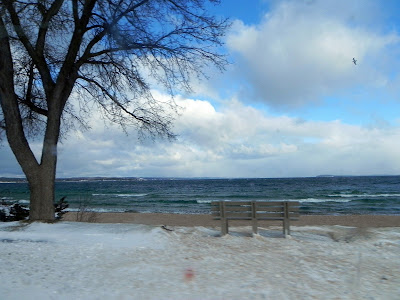 So we get to Mabel's.  It's Monday mind you.  January 2nd.  9:00 Anti Meridiem.
Mabel was not there.  Nobody was.  We actually ate at McDonald's.  It was the only stinking place open. 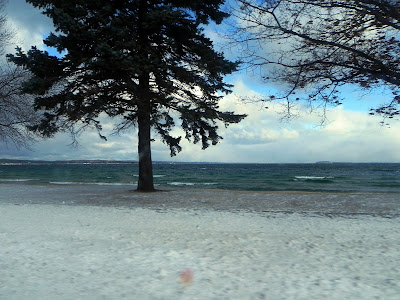 We decided that our return trip home should include driving through the Manistee National Forest.  Mr. Wonderful was fed so he let me stop to take a picture but it was snowing and we wanted to make some time getting back.  We planned on enjoying the drive and driving at a leisurely pace but once we got to the south eastern part of the state we still had to stop at MommaBean's and drop off her truck and pick up my car, etc., etc. 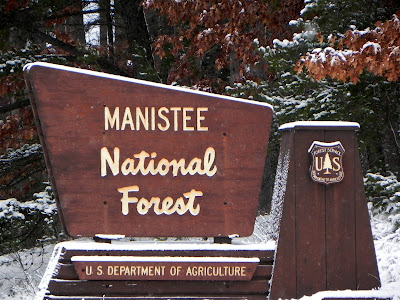 It was quite a beautiful drive through the forest.  However there weren't really any places to stop to use the ladies room.  So I practiced my bladder expansion technique.  I did well too! No stops along side the road in the frozen wilderness! 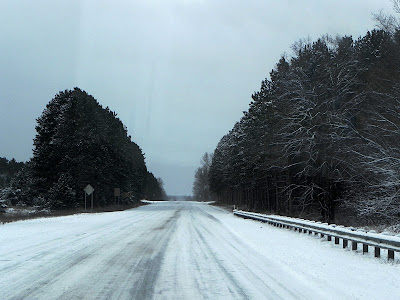 And this, this is the most priceless picture of the trip.  Only in Northern Michigan. 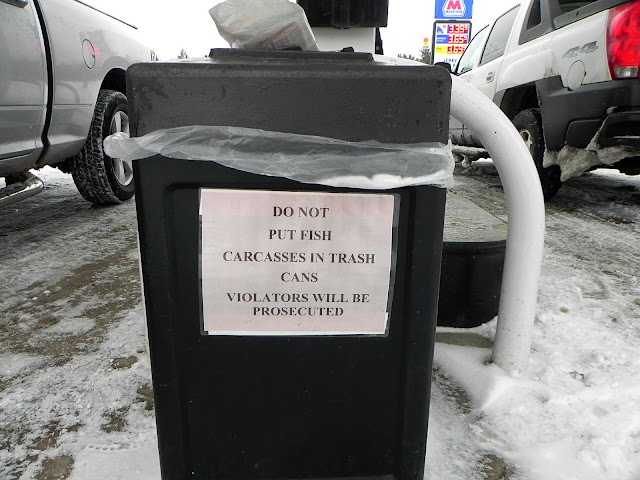 We had a great trip and I am already excitedly thinking of where we can go next year!
Posted by Poppy at 12:37 PM