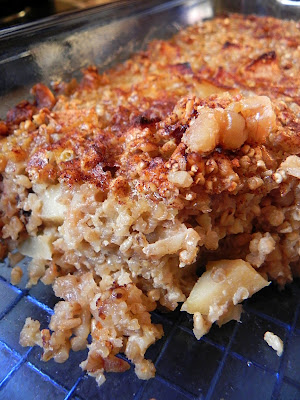 Wait, before I confess anything I want to tell you that Mr. Wonderful and I do not eat fast food very often.  Once maybe twice a month tops.

About every few (2-3) weeks Mr. Wonderful calls me on Saturday morning when he's on his way home for work and asks about breakfast.  When he calls I know deep down in my heart that he's wanting fast food.  Way deep down inside, I do too.  Because I am mostly lazy and this would save me from having to actually think of something to make, make it and then clean up afterwards.

Something happened last night.  I had the strangest urge to not be lazy about this mornings breakfast.  So I scoured the internet for things that I could make ahead and have ready for whenever Mr. Wonderful got home.

One of my favorite recipe sites is Mennonite Girls Can Cook.  Have I ever made anything from their site? Nope.  But a girl can dream can't she?

I found this recipe for Baked Oatmeal with Apple and Cinnamon there.  But, Houston, we have a problem.  I don't have any oats! I used them all and haven't remembered to replenish them.

Which got me thinking and forced me to get up and rummage through the pantry. Lo and behold I actually some Steel Cut Oatmeal left over from another time I had stopped being lazy about breakfast. Woo-hoo!

So, I started my search over and, quite brilliantly, entered 'steel cut' after baked oatmeal.  And that, lead me to here, Nourished Kitchen.  Now the stinker of a problem was I didn't have half of the stuff the recipe called for, and one pound of oats? Geez louise, that would feed an army!

The next link Google brought up was this one: Beef 4 Breakfast who in fact got his recipe from Nourished Kitchen.  However his proportions seemed more manageable so that is what I kind of did.

The recipe that I used is down below the pics:

Soak the oats over night by covering them in about an inch of water.  I let mine soak for 8 hours, but I think next time I'll soak them for a few hours longer.  There were some that I ran into that were hard little nuggets still.

Drain the water - My every day colander has enormous holes so I used this one which has a sifter like screen.
This is where I think the creative process can really excel.  I figured I would stick with apples and not get too fancy my first time out.
Then comes the Magical Concoction that you pour over the whole thing.  Mine consisted of: eggs, butter, brown sugar, half & half, walnuts and a wee bit of maple syrup. 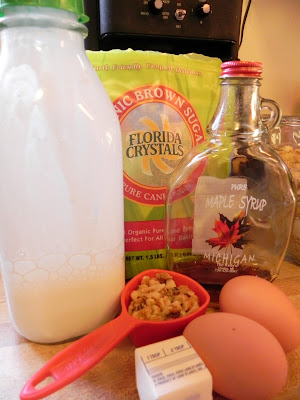 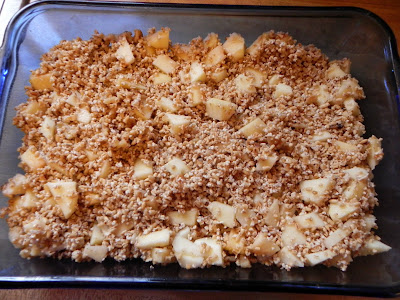 Pour your Magical Concoction over the top, sprinkle with cinnamon and bake! 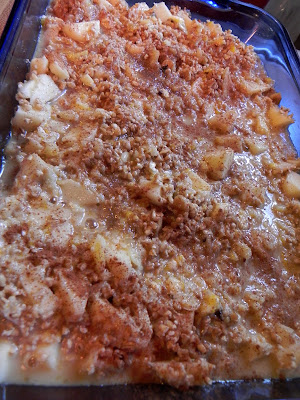 And this is the finished product straight out of the oven! 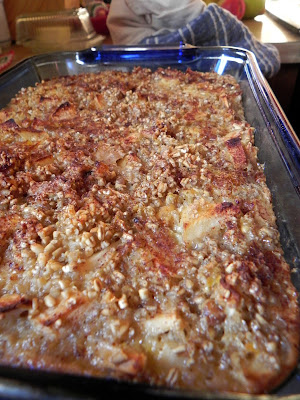 Recipe:
1 1/2 C Steel Cut Oats - this just so happened to be the exact amount I had
2 large apples - I used two Fuji apples we picked up at the Farmer's Market
2 eggs - courtesy of my MommaBeans Chickens
1 C half & half - I have nothing left for coffee, must go to the store immediately
2 Tbs butter, melted
1/2 C brown sugar
1/4 C walnuts - it's the amount I found in the pantry
1 tsp of Maple Syrup - I was experimenting...
Cinnamon
Oh.Em.Gee and even I like it- and I am not known for trying new foods.
This is a seriously awesome dish and you should absolutely try it!
I am going to make it again next weekend but I think I'm going to try different ingredients now that I know I like the basics.
A victory for this culinary mamby-pamby!
Posted by Poppy at 3:57 PM