I've been given a reprieve.  As we all know, February has an extra day this month.  So that means that I have this itty bitty window in which to write a post so that I will not have skipped the entire month.

And what a crazy month it was!

I don't have much time because I am going to a Book Club.  For the first time ever. Meeting my MommaBean and Mr. Wonderful's mom there.

The book is: The Forgotten Garden. 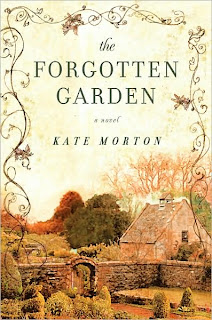 I bought the book when it first came out and after reading it lent it to MommaBean.  I'm not sure how my MIL ended up reading it..... anyway, I was invited to go, so I'm going.  And I am oddly nervous about it. (??)
Leaving in T minus 13 minutes

Mr. Wonderful celebrated our 5th/1st anniversary.  We took a Grand Tour of The South.  Let's see, in order,  we stayed in Pigeon Forge, TN - Chattanooga, TN - Orlando, FL - Savannah, GA - Gatlinburg, TN.  I have some pics but not a whole lot - I was too busy having a grand old time to stay still long enough for many pics.

Well, Hell.  That does not account for the whole month?!  Other things happened that kept me away, I promise.  I just can't think of them.

Oh! Today is my Ash Wednesday.  I am Greek Orthodox and this year our Easter is a week after y'all's.  I decided this morning that I was going to give up meat entirely for the next 40 days.  Which isn't that difficult for this self-proclaimed Flexitarian.  Mr. Wonderful who isn't hip to religion told me he would be giving up Ice Cream for Lent since he's such a great Greek Orthodox (he did baptize Handsome Face McGee with me).  Ha! But it is a big deal for someone who is an ice cream addict to give it up.  So maybe he is hipper than he realizes.

Of course being a Most Excellent Wife I, in a show of solidarity, have also given up ice cream.  Double points!

That's it folks.  That's all I can think of to jot down.  March won't be like February, I'll be back! Soon!
Posted by Poppy at 6:15 PM No comments: