Blurb Unum:
Book Club went off without a hitch, of course.  I was being a goober.  We set up some guidelines and decided who would be picking the books in which order, etc. MommaBean was first on the list and she chose: 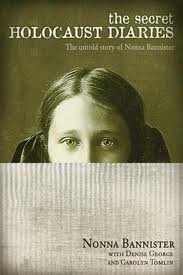 I just got it in the mail yesterday, I am not very far into it and so far I love it.  My only complaint is the editors.  They've interjected little tidbits of "information" throughout the paragraphs.  The wisdom they feel they are imparting is common sense.  They're simply repeating what Nonna had just clearly explained.  In nearly the same verbiage.

Example:
Nonna's translation of her diary- "When the family left she, (grandmother) would take the portrait down, carefully wrapping it in blankets, and would store it in the attic due to political changes that had taken place during the Bolshevik Revolution."

Editors- "Grandmother had hid the portrait of Grandfather, who had served the last Tsar, because at the time of the Bolshevik rule, Nicholas II sympathizers were in grave danger."

Riiiiiiiiiight.  Nonna had just got done relaying that her Grandfather was a Cossack and had served the Tsar and that her grandmother would get the portrait out when they were all at the Great House.

It is annoying and disruptive to the story. 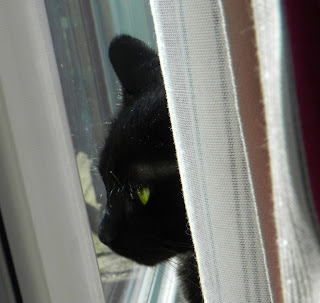 I don't know what else to say other than she is special.  Very, very special.

The vet said that like not all people are smart neither are all animals.  I like to think of her as Special Needs.

Mr. Wonderful and I have been retraining ourselves to fulfill her needs.  Along the way she's had to make adjustments and so have we.

One of the adjustments is we've added a little, low sided, litter box in one of our bedroom corners just for her and her alone.  She likes this and we're now a happy family.  Except, sometimes though, she misses.

Just a few weeks ago I witnessed it myself.  She stood in her litter box and with her bottom facing out into the room.... yeah.  I didn't know whether to laugh or cry.  I sure as hell wasn't going to yell because she would be scarred for the rest of her 5 lives.

That and she's compulsively licked all the fur off of her belly, and insides of her legs.

Her skin is really, really white.  Which contrasts nicely with her all black fur.

Blurb Tres:
I've been using my homemade laundry powder for 6 weeks now and I can report that it works fabulously! Even Mr. Wonderful's grungy, greasy work coat came out clean! When I make some more, I'll take pictures and post them along with the "recipe".  It is Uber easy, mainly because I'm lazy and took the simplest way out  and didn't do any "cooking" of it.  And it's cheap! Sa-weet!

Blurb Quattuor:
There was more but my CRS is kicking in.  Argh!


*8:27 p.m.: It's still not coming to me.  I've been staring at the screen for 10 minutes hoping it would pop into my head so I wouldn't have to end the post that way.

And that, my friends, concludes this blather-fest.  Until next we meet!
Posted by Poppy at 8:30 PM