A Tale About a House

During the summer I became a Realtor.com junkie.  I became obsessed with finding a house where my Beloved and I could plant a proper garden.  And have a couple of chickens.  Oh, and a few pygmy goats.  And probably bees.

I would look up two or three houses in our price range and when my Beloved and I got home from work we would go do drive-by's then go out to dinner afterwards.  We spent a good portion of our summer doing this - thinking and dreaming and what-if'ing.

One particular night after hating the two houses we'd driven by we decided to take the back roads toward town.

And that's when we saw this: 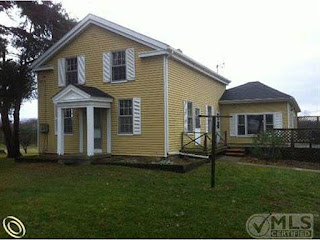 "Hey wait! Back this bad boy up, what about that house?" Is what I believe I said. Okay, maybe I squealed.   A bit.

After a six-point turn in his pick-up my Beloved slowly pulled into the driveway while I ran hobbled up to the Realtor's sign and called the listing agent.  He agreed to meet us the next day (Saturday) at 10:30 to show us the house.

But that's okay! 'Cause he let us in the house.  Oh.Em.Gee.  It's perfect.  Not shiny and brand new perfect.  It is just awesome!

It has style and character and charm.  Oodles and oodles of charm.  It had one itty-bitty (in my opinion, not my Beloved's who thought it was a deal breaker) problem.  The furnace just happened to be a oil/wood burning furnace.  Oh, and it was a short-sale.  Those are PITA's.

But I loved the place so much that a few days later I called the Realtor and said that we wanted to look at it again.  We wanted to be sure that this what we wanted because short-sales take a long time and you're locked in if you make an offer.  We set the appointment for the following Saturday.

The Friday before we were to go back he called and left me a message saying he had to cancel the showing. That was it.  Nothing further.

A few days later while perusing Realtor.com I noticed it was off the market.  I figured the bank had accepted an offer and the old place had sold.

And more than a little heartbroken I decided to give up looking for a house and just focus on doing up the condo more and just love what I already have.

Stay tuned for the rest of the story!
Posted by Poppy at 8:31 PM