Have you ever jinxed yourself? I do it all the time.

I'll say something stupid such as, "I haven't gotten sick in ___ years!" only to come down with the Bubonic Plague two days later.

Earlier this month I said something moronic along the lines of "This is SO EASY! Way easier than buying the condo.  Smooth sailing! Not a problem in sight!"

The Universe clearly heard that as a challenge.  Which, in my defense, it wasn't meant to be.

There are some reaaaaaalllly cool things about the house.

For instance in the crawl space, which is under an addition that was probably added on sometime in the 1900's, there is rumored to be a cellar door (I don't know because I will never be going down there) and there are  logs.  Whole logs, bark and all used as support beams.

And in the basement, which isn't scary at all considering it's a Michigan Basement, there is this: 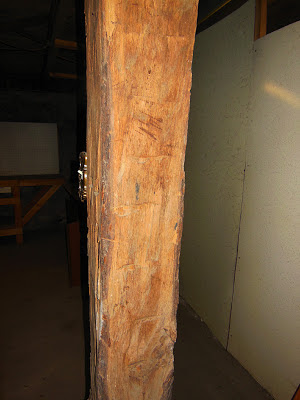 A hand hewn beam.  I mean, you can actually see the ax marks!  This bad boy is helping to support our house.  Solid as a rock!

And then there is this: 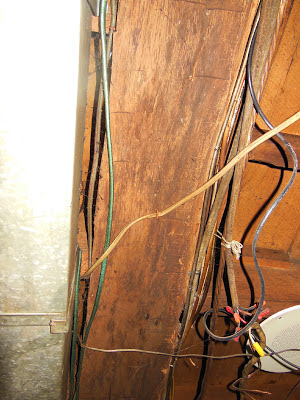 (Go ahead and ignore, for now, the horrific wiring/splicing/electrical hazard.)

And this is the "I-Beam" or what would be called an I-Beam nowadays, which is also hand hewn.

And do you know what the problem with 150 year old hand hewn beautiful wood beams and logs supporting your house is?

Where's a dang aardvark when you need one?!

In the second picture you can see where the little jerks have been feasting.

The I-beam is toast.  As are some of the floor joists under the addition - which is the kitchen/dining room/mudroom/weird little room in the back.

There you have it.  We're waiting for the official report from the inspector so that we can go to the bank and say something along the lines of "This is structural, you can't sell it to anyone without fixing it so fix it. Please.  Because I really, really want this house and have had actual dreams where I am living in this house."

Okay, maybe the stuff not after the please.

And I'm going to have to parse out  the pics and info in small little increments because we won't be closing until after the big problems are solved.

Did I mention that they didn't winterize it properly so the plumber, my wonderful cousin Jody, wasn't ever able to get the pump going? No? Well that's a post for another day.

Stay tuned and keep your fingers crossed for us!
Posted by Poppy at 9:57 AM