Next to skulk, conundrum has to be one of my favorite words.

And that's exactly what I've got.  A conundrum.

My Beloved, as I may have mentioned before, is a truck driver.  But I've never brought up the fact that he is a clotheshorse.

He is a very hard working man with a demanding, physical job and he has a work ethic like nobody else that I know.  I love and appreciate that about him.    And I've never met anyone rougher on their clothes.

Now, about his clotheshorsishness.  The man does not know how to give up on a piece of clothes.  He keeps everything.

Ya see where I'm going?

But I've drawn the line at holey socks and underwear and after 5 years and 364 days, he knows to just toss 'em.  Pitch 'em.  Into the garbage, there is NO using them one more time.  This small victory is mine!

He has clothes that he wore 20 years ago as a wild a wooly teen/young adult- underground band shirts, v-necked sweaters (I'd like to see a picture of him in that!) and jeans. A lot of jeans.  They're all things that for the past four years have never once left our closet.  And who knows how long before that they had been consigned to a dark corner of his bachelor pad.

He easily has two and a half times more clothes than me.  And last weekend when I talked about donating some of the clothes he hasn't seen or worn in 4, 5, 10 years he said "I'm not ready yet."


But this thermal shirt? I think he's been sneaking this one in and out of the laundry for a looooong time.  You know, volunteering to wash his own work clothes so that I wouldn't find it. 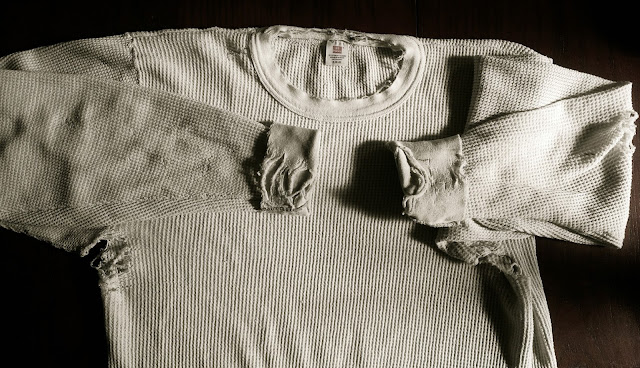 Notice if you would: a) the missing armpits, b) the holey elbows, c) the shredded cuffs, d) the disintegrating collar and e) the general dinginess.

He has a million others just like it but in better states of health.

My conundrum is this: Do I pitch it or do I fold it nicely and put it away?

I am inclined to toss it.

Update:
I kid you not, I just read this post to my Beloved and do you know what he said after he shouted a laugh?
Beloved: "But, it's still a good shirt! Is that a blog that people can comment on?"
Me: "Yes."
Beloved: "Okay, so it has a few holes but it's a good shirt, we'll see what they say..."
Me: "There are more holes than fabric!"
Beloved: "Leave it to the people."