The Room with Many Names and the Kitchen

Unless we're friends on Facebook you haven't seen any pictures of work we've been doing to 'round the Farmhouse.  Mostly because of the fact that in the chaos I still, to this day, haven't exactly found my computer.  I'm pretty sure it's in the Library but I can't be sure - because as of last night it looks like this: 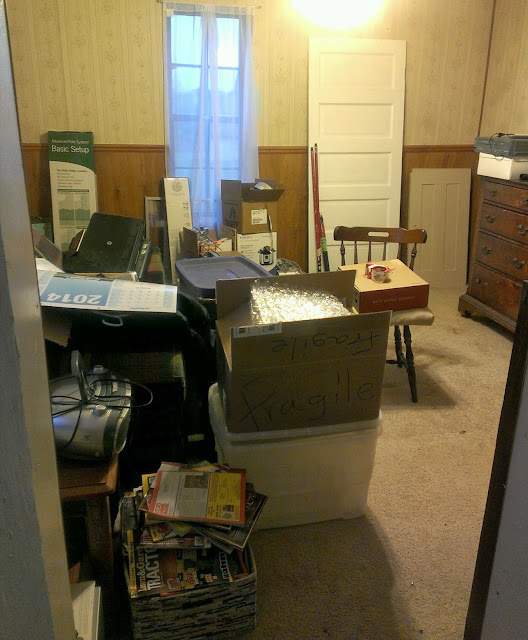 I see the printer there on the love seat which leads me to believe that the computer is in there somewhere.  Ergh.  Things I can find in the room include: the door that goes from the kitchen to the mudroom - which we decided to leave off in the summer to there's more breeze in our unairconditioned house, the doors to the mudroom cabinet, a VCR/DVD combo - just in case my Beloved gets a hankerin' for watching a VHS (?), an Instapot that my mother bought me for Christmas last year that I haven't used for various and sundry reason and felt criminal while transporting from the condo to the Farmhouse because of that horribleness in Boston last year.

When the listing agent showed us the house he called it the "Moron Room" and explained that with these old houses over the years they continually kept adding "more on" as space was needed.

I got the feeling that my cherished Farmhouse didn't like the Moron nickname so I decided we should start calling it the den.  Which, after a few months, I decided I didn't like.  So in order to get some fancy up here I recently christened it The Library.

But, let me show you some pics of a non-disorganized, filthy, forgotten room (that I took with my phone which does not require a computer to download)!

When my Beloved and I first looked at this house the kitchen looked like this:

I used Rust-o-Leum Cabinet transformations to paint all of the cabinets a bright, clean white and replaced all of the hardware and hinges.

So there you have it! A for-real-sy update about the Farmhouse! More to come - promise.  Girl Scouts honor and all that.
Posted by Poppy at 7:49 AM