I was supposed to write this post on Sunday - but instead did chores out in the yard.

But, whatevs.  I'm writing this post now! Aren't you the luckiest ducks ever!?

On Saturday my Beloved and I went and helped his grandmother move.  She's moved into a Senior Living Apartment and so has been whittling away at her possessions.  She's lived half her life in this one house.  You accumulate a lot in a lifetime.  Even more when you haven't moved in 41 years!

We scored some super awesome stuff - my Beloved got a lot of his grandfathers tools and a fire in his belly for organizing our pole barn.  His grandfather, who I never had the chance to meet, had everything organized and labeled which has inspired my hubby.

I spotted this bad boy when we were doing the actual moving a month ago.  Yes! Yesyesyesyesyes! It's her wrought iron bed from her childhood.  The only, wee bitty issue is that it's missing one of the side rails.  However investigation on Ebay has turned up quite a few, even some with, what I believe, is the right end! It'll be perfect in a guest room! 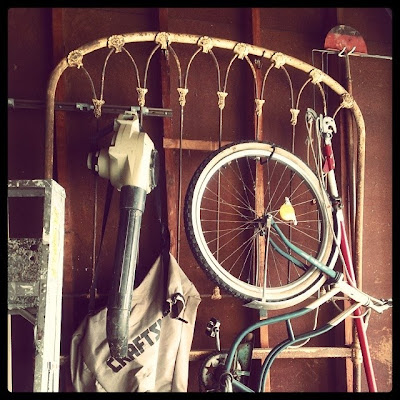 Also, scored from Grandma is this beaut! Isn't it fabulous? I had never seen a ceramic canning funnel.  Searching the intergooglewebz I found out that it is from the late 1800's. 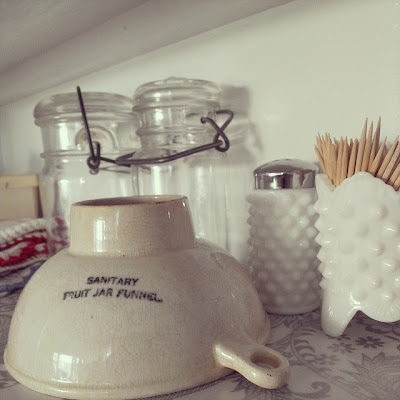 At one point her and I were sitting around taking a rest and chatting when she said "Don't anybody tell me about the "good old days" - there was nothing good about them!"  She told me about growing up in the midst of the Depression.  And many stories including one about how her and her mother would can green beans using a large copper cauldron to process the freshly picked beans.  She said they would have to boil the jars for six hours to stave off the botulism (don't try this at home, kids!).

On Sunday I did some tea dyeing.  I've had this on my nightstand for eons and in the move, in its box it somehow got a stain on it.  I tried and tried to get the stain out but it wasn't budging.  So I decided to dye it. If you can't beat 'em, join 'em! 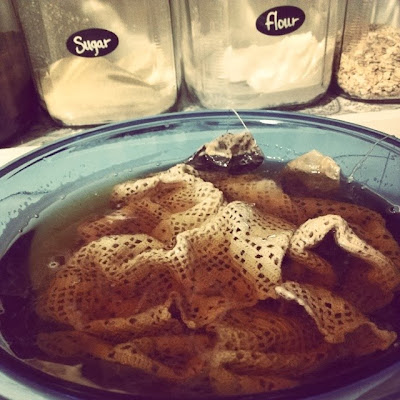 It came out perfect! (Yeah, I know, no picture.  But I will get one.)  All of the "recipes" that I found on the internet were for dyeing large things, or vast quantities of things so I made up my own.  I used hot water that I nuked (do people still use that term?) in the microwave and three teabags.  There are two English Breakfast Tea bags - from England and a Chamomile one because I like the way it smells.

Not that after the soaking, rinsing, washing, air-drying you would be able to smell it... 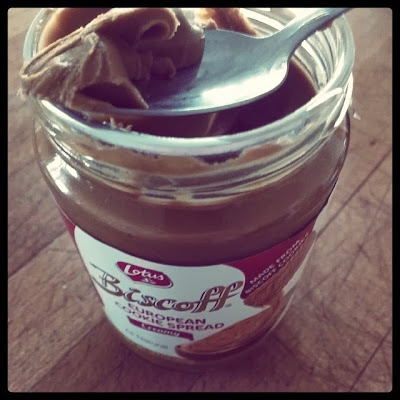 I have had to pray for help in avoiding eating the whole jar by myself, in one sitting.

I've been eating it straight off the spoon however, I briefly did consider eating it on something like toast or an apple.  But have decided that they would alter the heavenly perfection that it already is.

I bought a second jar and hid it in the house in case my Beloved decided he needed to help me eat more than I think he should eat.

Also, I need to buy more spoons.  Because even though I am in my own house, I haven't been double dipping (?).  Maybe if I run out of spoons it'll help temporarily curb my addiction.

Or not.  There's always my fingers.

This post shared at New Life On A Homestead
Posted by Poppy at 1:52 PM