The Chickens: An Introduction

Since I am mostly lazy and have almost no time fer nothin' cause I'm tryin ta prepare myself for Greece I haven't gotten around to properly introducing Flint & Flavia.  But, I will.  We swears on the the Precious.

Like right after I extinguish the memory card from my camera which I had to set on fire to show it who's boss because it just. stopped. working. The camera won't recognize it, the computer won't recognize it when I put it in the little slot, it just keeps saying ERROR ALLYOURPICTURESARELOSTSUCKER.  And of course I had a gabajillion pictures of the kittens being The Cuteness.

So moving on from that tragedy. I went out to the Prison Yard to visit the chickens today and took my camera, with new memory card inserted, and somehow I took 108 pictures and 2:00 video (?). So I'm going to drag  the introduction of my little flock out painfully slow.  That way you'll get at least eight blog posts out of me! 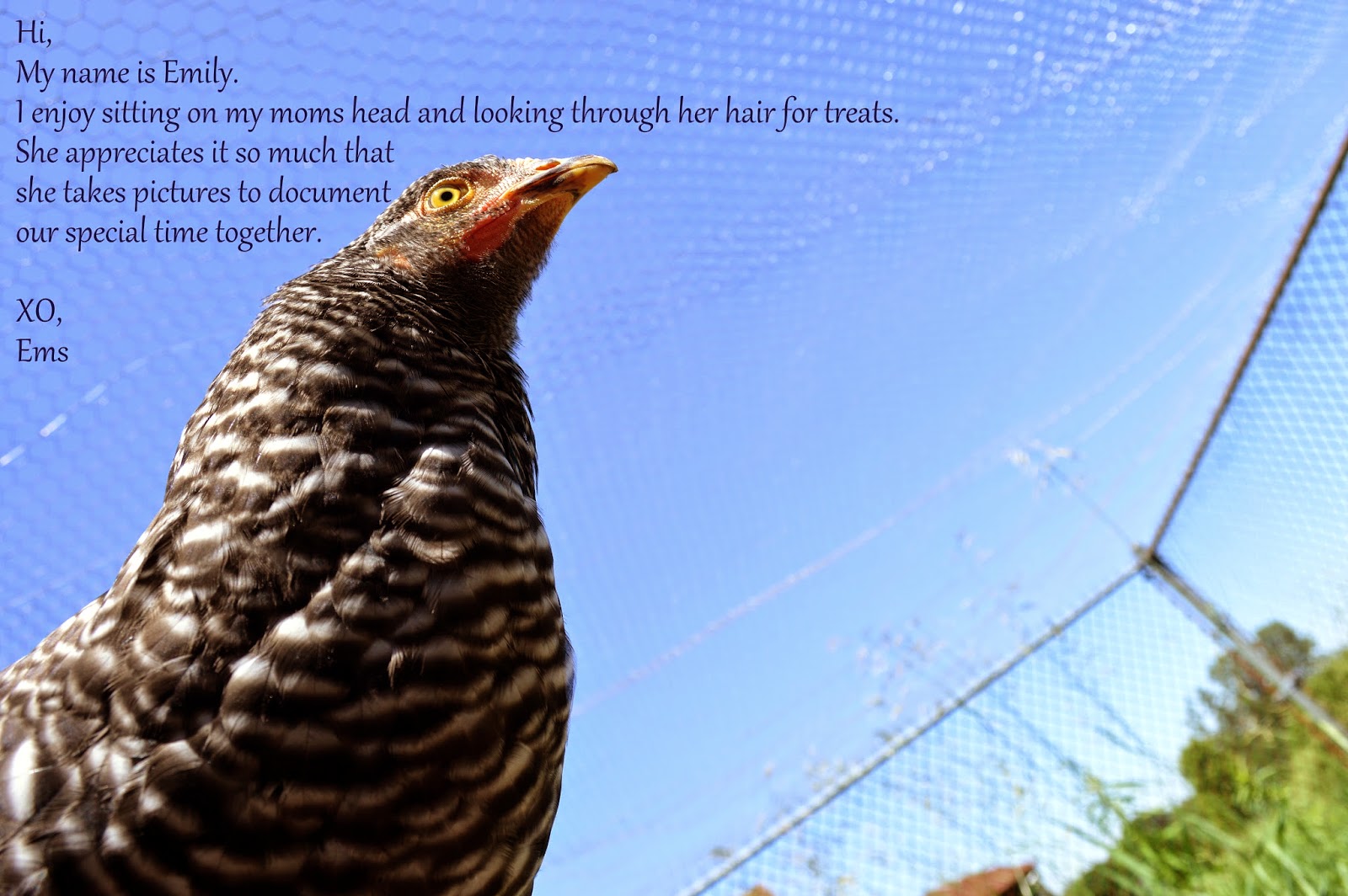 Y'all meet Emily.  The sweetest chicken around.
Posted by Poppy at 1:41 PM No comments:

Bringing up the rear here, which is where I usually place in sports, for Cari's Theme Thursday: Sports!

Me? I'm not athletic.  Never have been really.

I even hated Field Day in elementary school.  I didn't win any ribbons.  Ever.  I never received praise for my heroic efforts in the long jump, which if you're the shortest person there, other than the kindergarteners, is an Epic Endeavor! Whatevs though,  'cause that was +/- 30 years ago.  I'm over it. Mostly.

Okay, so, I don't run.  If you see me running, you should run too.  Because I'm here to tell you that the only time you will see me run is if there is a Tyrannosaurus Rex hot on my heels and the theme from "Chariots of Fire" is playing in the background.

I did however play soccer during that time, and that, I was passingly good at.  I played defense because, as you now know, yours truly is not a runner or sprinter or jogger or even a speed walker and defense didn't require me to run very far very often.

I was the only girl on the all boys team but after being carded more often than not because I couldn't remember to turn my dang hands the right way while shielding my young lady chest, I didn't sign up the next year.  Woe is me.

So there you have it - the beginning and end of my athletic career.

Except for a two year stint on the tennis team in high school (see? Not a lot of running) which we will never speak of again.
Posted by Poppy at 7:37 AM 3 comments: