Getting to a Zero Waste Minimalist Hygge Farmhouse

Do those things even go together?

In my mind they do.

While I was on a hiatus? A sabbatical? A rumspringa?- anyway, while I was away I became entranced by the Danish concept of Hygge, going zero waste and cleaning out my metaphorical and physical closets/cabinets to create a minimalist (ish)- I'm all about the ish around here, farmhouse. The minimalist but not austere farmhouse seems to be a bit of an oxymoron if you look around the web.

We've started some basic zero waste shopping and have very consciously started thinking about all of our purchases, not just food, and the packaging waste they create. Even my Beloved is on it! We were talking about mulching the garden beds over the weekend and he suggested having a landscaping company drop off a mountain of it rather than buy plastic bags from the big box stores.

The only problem thus far is the closest bulk food store is in Ann Arbor which is 30+ miles away.  It's close to where I work but at the end of a long day I usually forget and head home, only to remember 5 miles from my exit. I asked my Beloved if I could quit my job and start a bulk food store in Howell but he's not having any of it. 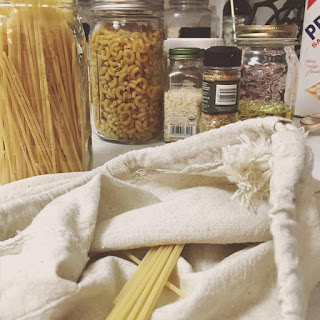 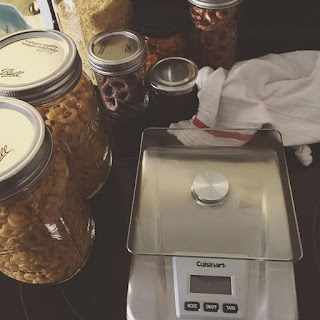 If you're curious, a quart size Ball canning jar weighs, .99/lbs and a pound of pasta, elbow mac or spaghetti noodles made "pot-sized", fits perfectly in one!

Just yesterday I reused a pickle jar and a candle holder that previously held a pretty 3-wick beeswax candle to plant some succulents.  My Beloved's aunt bought me a gift card last year to a local nursery and I finally found the time and the will to drag my behind up there. 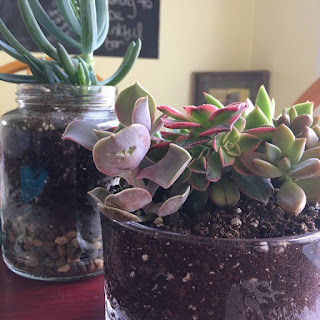 Reuse all the things!