How do you pick up after you've been gone for so long? I dunno' but, you know what I'm not doing? I'm not giving up on this blog.

So, last year was super not awesome. In fact it was down right craptastic.  The good news is that I came out on the other side of 2016 alive.

In August I had a non-aneurysmal perimesencephalic subarachnoid hemorrhage; a hemorrhagic stroke.

The day before my Beloveds birthday, in the wee dark hours of that Friday morning, I was awakened from a deep sleep by what felt like someone smacking me in the head with a brick.  I sat up, holding my head and literally said out loud to no one but myself, "a headache should never wake me up."  The pain was unreal.

I decided that since I was awake I may as well get up and go to the bathroom.  While in the bathroom I started to get nauseous and told myself I was overthinking the situation.  Just take deep breaths, Poppy and chill was my mantra.  I talked myself into getting two Tylenol out of the cupboard and going back to bed.

As soon as I got back to bed I became diaphoretic; the sweat was actually pouring off of me.  It was then that I tried waking my Beloved up by gently shaking him and saying "something is wrong. Something is very wrong".  He gently patted me on my arm and told me it was okay and to just go back to sleep.  Right.  He was right, I was overreacting.  It was probably just a migraine as I've never had one and who the hell knows what the symptoms are other than a terrible headache.

I rolled around in bed for a while trying to put my head and neck in the exact right way just so the pain would stop.  Nothing worked. I was a moaning, sweaty mess and my Beloved got up because he couldn't sleep due to my restlessness and that's when the vomiting started.

I sent a text to work telling them I was very sick and couldn't come in and tried to, with one eye open and my brain being crushed Google the symptoms of sudden onset headache.  The news wasn't good.  But, Google is NOT a doctor and I was overthinking my symptoms.  I asked my poor beleaguered hubby to get me a Sprite.  Maybe it was food poisoning from the Chinese food we had at a work meeting the night before.

Guess what.  Sprite did not help.

Three hours later, while my Beloved was getting ready to go to work, I decided that enough was enough and that I was going to call my mom and ask her to drive me to the urgent care. Thankfully I caught her before she left for the Y, she changed back out of her swimsuit and rushed over.

I slipped into a maxi skirt and t-shirt when she arrived and kept insisting that she take me to the urgent care, not the hospital even though the hospital was closer. It was just a migraine and I was going to feel like an ass because I obviously was blowing things out of proportion. As it turns out, they changed over from an urgent care to an emergency room, which is fortunate considering my diagnosis.

They got me back right away, the ER tech was pissed I had tried to drink some water on the way there and was frustrated with me because I couldn't stop vomiting (?).  The doc ordered a head CT and when I asked the nurse for something, anything, for my headache the petty woman rolled her eyes as if I was seeking.  Hmph.

I was dozing on the stretcher when the ER doc came back and shook me awake saying that I had a subarachnoid hemorrhage and they were going to transfer me to the U of M.  Silly, drugged up me, asked her "do I really have a bleed or do you just "think" (and I used quotey fingers here) it's bleeding?", she laughed at me and told me that she had already called for an ambulance to transport me and things would start moving very fast.

It was then that I sent a text to my physician scheduling cohort, Dr. T, who happened to be in the OR at the same hospital (I work for anesthesiologists) that day. It went something like this "hey! I can't come into work today, I have a subarachnoid hemorrhage and they're transferring me to the U."


He sent me a text back asking if I would like for him to pop down and I, blithely, without a care in the world said suuuuurrreeee, whatever, that's fine, okay! While I know what a SAH is, I was so muddled that I obviously wasn't thinking straight.

How these people put up with me, I will never know.

My mom had sent a text to my Beloved saying that they were transferring me and maybe he should come.  Then she started to Google what a subarachnoid hemorrhage was.  At that point she freaked a bit.  She sent a second text to my Beloved, who being a truck driver and on the docks hadn't heard the first text, saying that it was emergent and that he had to come.

Here comes the disjointed part - the ambulance showed up, they medicated me more, told my mom not to try and follow them since they were going to be using lights and sirens.  Random chattering with the paramedics saying I was fine if one could be fine with an exploding brain. I opened my eyes and I was in a room in the ER and there was my sister (how did she get here from Flint?). My mom and two aunts were also crowded in the room.  Doctors were talking to me, asking me things.  I closed my eyes and there was my Beloved.  Just him and I alone in the room.  He was crying.  My big, burly truck driver (I am crying right now, FYI) who I told not to worry and we joked that it definitely wasn't food poisoning and that's why there isn't an MD after his name. He always makes me laugh.

I signed papers, they told me about the different types of surgery they may have to perform on. my. brain. Then I was whisked away and all of a sudden I was in the coldest place in human history- interventional radiology.  I had an cerebral angiogram, an MRI/MRA and another CT.

There wasn't an aneurysm and they couldn't find why my brain had bleed but it did stop bleeding so off I went to the Neuro ICU.  No surgery needed.

I don't know how I got so lucky.  God was definitely there with me when my brain had a tantrum.

I stayed in the ICU for a week where they did an ultrasound on my noggin each day and woke me up every hour on the hour for neuro checks. The day before my discharge I had to have another angiogram.

No bueno. During the first one they gave me conscious sedation as I had to follow directions, like don't breathe, don't swallow, etc.  Lemme tell ya, it hurts.  It feels as if lit matches are in your face & head.  So, when they said I needed the follow up one before I could go home my anxiety about the procedure went to defcon 2.

Y'all I had my first straight up religious experience, in that room while praying for all that I am worth. I lay there as still as I could make myself, with a catheter in my femoral artery running up into my neck they as were filling my skull with The Burning Liquid Of Death and it happened.  It brings tears to my eyes when I think about it (the religious experience, not the test. Okay, fine, the test too but not in the same way).

Anyway, I passed the second one with flying colors and somehow I am one of the lucky ones. I have no neurological deficits but in all their poking around in there they did discover I have a cyst in my brain! Awesome.  I have to have yearly CTs to keep an eye on this puppy and make sure it doesn't grow too much bigger and press on the wrong things.

I've had to do some serious in-depth, down in the weeds, exploration of my life and what I want from it.  And having a month off after being in the hospital for a week gave me that time.

To quote Whitesnake:
I don't know where I'm going
But, I sure know where I've been
Hanging on the promises
In songs of yesterday
An' I've made up my mind,
I ain't wasting no more time
But, here I go again
Here I go again

~Poppy
P.S. Fill out your Advance Directives, peeps! It matters!!!
P.P.S. I'm dating myself but, I saw Whitesnake in concert! 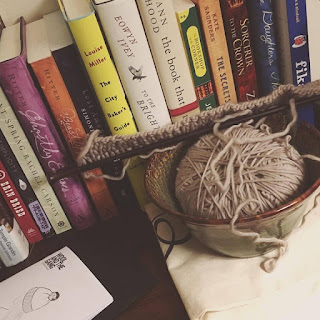